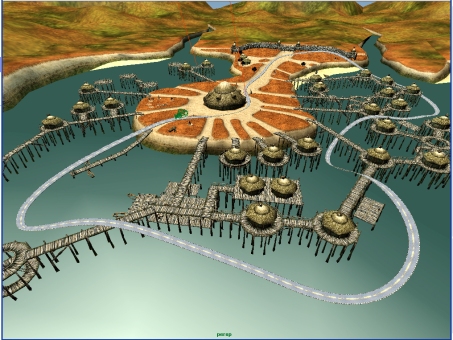 For some ‘on rails’ games (racing, fps) creating the surrounding environment with geometry and maps can be overkill- especially if the gameplay prevents you from getting too close. The midground and distant game world could be pre-rendered and streamed in based on the players location on a path.

First I built a track in a hires modeled environment. (In this case, the Sun Village level from Dark Shores)

Then I rendered a cubic environment map from positions around the track (500 of them for this test). This was turned into an animated texture sequence

Now I don’t need the environment any more. As I travel around the track, a local skybox surrounds me and updates its image based on my position in track space.

From a RaceCar pov, the view looks almost identical. I’m swinging the camera around the car a bit on this movie to show that we can look in any direction and the illusion holds. The car and track are rendered geo – this gag works on backgrounds only. The car is reflection mapped with the animated skybox textures, so you get the look of raytraced reflections for free.  (Thanks to Dale for the Dirk- Pitt- mobile)

Varied coverage is possible with this technique. I think it would be most suitable for Gran Tourismo type racing titles where we could stream the animated skybox texture off DVD, and therefore get amazing image quality and environmental complexity with no render hit.