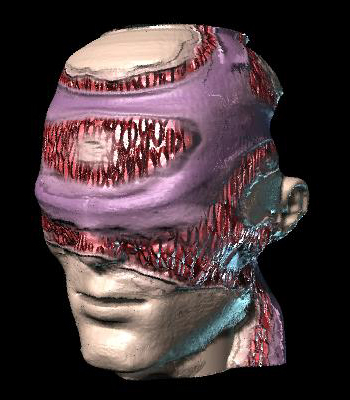 Defining a 3 dimensional solid by enclosing its volume with a geometric skin isn’t the only representation available.Here are a few possibilities that open up when you think of the boundary of enclosed space as a radial distance from a solid core. (In this case a cylinder).

The head is described as a cylindrical displacement from the surface, so the actual render geometry becomes topologically irrelevant. ( Aside from the fact you need it tessellated high enough to not look too chunky, but thats more a Maya limitation. Use Renderman to see displacements at their best )

Once your geomoetric shape is in 2d form, the full pallette of 2d image manipulations become available to you, letting you do things easily that in 3d form are often difficult to set up and control. Like this non-linear deformation:

This is the classic AfterFx ‘ripple’ effect, with a bit of AfterFx ‘cells’ faded up in the middle. It was output as two image sequences, an animated displacement, and a matte for the bubbles that will appear on the face.

The shader is pretty easy to set up. I used the pus matte as the blender for both colour and specular color. The animated displacement filein went through a setrange so I could scale the displacement to the right distance. (750 in this case)

The final result shows some artifacts from Maya’s renderer and the 8 bit dispacement map, but looks pretty neat. I guess you could do part of this with a wave deformer if the geo was hires enough, but it’s a lot easier using the implicit surface provided by a displacement map.  Easy to do variations, too.

Creating variations and trying new ideas seems to take a lot less time when you don’t have to worry about building the geometry to suit. A 3d morph, for example, becomes just a 2d morph, or even a dissolve if you’re lucky, Using animated alphas to go from one displacement map to another can give you quite gory results (especially if you accentuate the edge). Remember, this is all using a single nurbs cylinder. We haven’t even started animating the actual geometry yet!

Blurring the image as it shrinks looks like a melt. Screening the images together makes them intersect sensibly.

AfterFx clouds. The curvature of the resultant surface is very sensitive to the rate-of-change-in-luminance – thats why I think its so hard to paint good displacement maps. 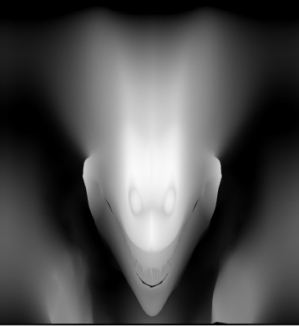 But how did I get the displacement maps to start with? A slit-scan cylindrical render with depthcue.

The transition between Fergus and Sheevra is an animated matte. I used the edge of the matte as ANOTHER mattte to put the gore texture between shapes. I also used the transition matte to split between surface colours, but it could just as easily have been between complete shader networks.

This time, both the Sheevra and Fergus have completely separate materials; maps, bumps and reflection characteristics. The matte splits between two Blinns and feeds them into a full ambient Lambert which has the animated displacement on it.

One of the cool things about dispacements is that adding them together gives you the ability to slide one surface over another. In this case, I subtracted the Fergus map from the Sheervra map to give me a ‘rubber layer’ map. Then I added the Rubber map to the Fergus map again, but animated the Y translation of it. (and the colour, specular, bump and transparency maps as well) Quite hard to get that deformation with geo in Maya.